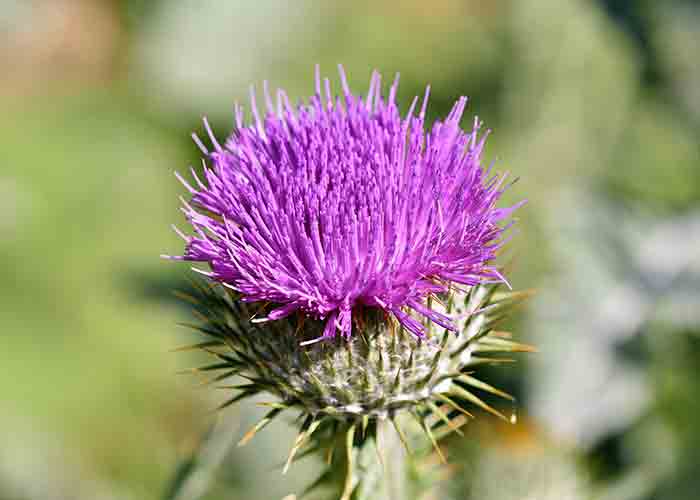 Learn more about Aries’ birth flowers in this article.

Aries are passionate motivated and confident. Natural born leaders. They are cheerful as well as relentless. It really isn’t surprising that thistle and honeysuckle are the flowers of Aries.

The thistle is a flowering plant. It is a member of the sunflower family. Thistles can be annual, biennial, or perennial. The flowers are usually pink or purple and are surrounded by spiny bracts. Some thistles are considered noxious weeds and invasive plants. This has given them a somewhat bad reputation. This is unfair since there are many great varieties of thistle to enjoy. Thistles can grow to ten feet tall like the Roadside thistle. The Globe thistle, a perennial, is a favorite of gardeners since it attracts butterflies, bees, and ladybugs.

Legend says that in the 1200s the thorn thistle saved Scotland from the Norse Army. The thistle became the emblem of Scotland. Thistle is embroidered on rugby uniforms in Scotland to show bravery and fierceness.

France associated thistle as a protection against bad doers and is commonly called the flower of the sun. This is actually pretty accurate since it belongs to the sunflower family.

How Does Thistle Relate to Aries?

Thistles balance sweetness with a relentless strength much like Aries. Thistles are pretty to look at and have a very sweet aroma but they have a strength that allows them to grow almost anywhere and they can take over a garden. Aries cheerfulness is balanced with strength and relentless determination much like the thistle.

The honeysuckle is a tube-shaped flower. it belongs to a large family that consists of hearty shrubs and vines. it is a favorite of the hummingbird because of its sweet nectar. Some are deciduous and some are evergreen, it really depends on the climate. Honeysuckle is easy to grow and can be grown in practically every state. The honeysuckle is a very tolerant plant and will thrive in any soil.

Devoted affection is also a symbol of the honeysuckle. It is said to have healing qualities when it comes to nostalgia or homesickness. Honeysuckle is also known to have other medicinal qualities and was often given to ill people as a first attempt to heal them of their ailments.

How Does Honeysuckle Relate to Aries?

Aries, the first sign of the Zodiac, signifies newness or new beginnings this causes Aries and honeysuckle to be an awesome pair. Aries are cheerful which goes with happiness which is the most known meaning of the honeysuckle. Honeysuckles are very tolerant plants and can grow practically anywhere. Aries just like the honeysuckle are relentless and strong.